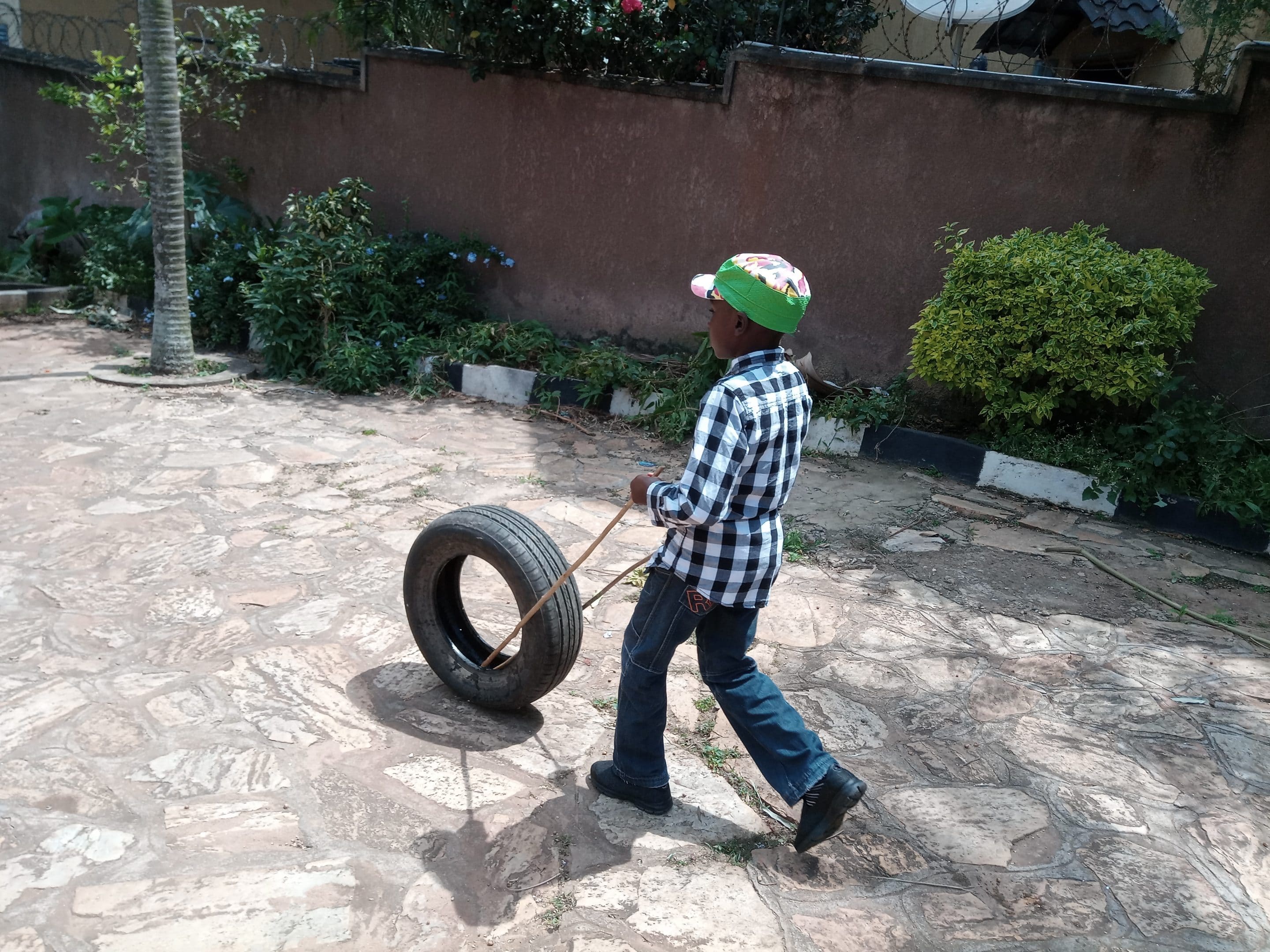 A Classroom of One

In the month just before Uganda locked down due to COVID-19, an 11-year-old boy called Mukisa wandered into my life. He is the son of our part-time cleaner, and my mom asked our cleaner to let him stay with us a while because he was really such a pleasant young man.

Before we knew it, we were in lockdown and he could not return home (all public transport was shut down, and many of us were not allowed to drive our private cars). We quickly got used to having him around.

I had been told that he’d just started his 6th year of primary school but had only managed to progress to the third grade, mainly because he was always having to miss school when his single mom was unable to pay his fees. While he was staying with us I thought it might be a good idea for him to keep up with his reading at least, so I pointed him in the direction of some children’s books on my bookshelves.

A week or so later I noticed that he had not touched any of the books, so I renewed my offer, which he happily accepted. aAother week rolled by and still no action, so one night I took him aside and told him that while he was out of school he needed to keep doing something or else he would forget even the little he knew. Eyes downcast, he mumbled something in response.

“Sorry, what?” We spoke in Luganda because his English was pretty sparse.

He continued in a low voice, “I did not go to baby class.”

I just looked at him wordlessly and he continued to hang his head.

“Why didn’t you tell me before this?”

“Well, I did not know everyone very well and I felt too embarrassed to admit to it. Now I feel much more at home so I felt able to tell you.”

Just to let you know a little bit about what I do, among many other things I am a big advocate for the democratisation of education. Situations like Mukisa’s really get my goat. I spent a large part of my life teaching at a rural university campus in central Uganda, and I was always struck by how lively, bright, and inquisitive the children were when I ran into them along the village path, only to find those same children looking lost and confused when I’d encounter them in the local primary school. It was not the first time I had encountered a child who had been in school for 3 or 4 years and yet could barely read, but now I had one right in my house, and I knew I couldn’t do nothing.

I downloaded the Jolly Phonics app from the Play store, and bright and early one Monday morning Mukisa and I got started.

Almost immediately we ran into problems. The first few sounds that we had to learn were being demonstrated by such foreign concepts that Mukisa simply could not use them to help him remember the sound.

L was for Lollipop, and the poor boy had no concept of what this was. Even after I showed him a photo and he recognised the object (ah – sweetbom!), for the life of him he could never remember the word. So I asked him to tell me any word that he knew that started with the “L” sound, and he said “Leg,” so we went with that. (As luck would have it, the shape of his leg plus his foot formed the shape of the letter L.)

The sounds “C” & “CK” were meant to be remembered using the noise that castanets make.  Castanets! Even I had to look up a YouTube video to grasp exactly what that sound is!

“U” was meant to be as in “Umbrella” and this unfortunately set up the boy to keep reading the sound as “Um,” since he could not separate the “U” from the “m” in the word umbrella. In the end, we found a solution in the word “Bus,” which we also had to swap out with “bat” as in baseball: we’re a former British colony and he doesn’t know what cricket is, let alone American baseball! Anyway, we used “Bus” for the “U” sound so we could overcome the issues with “Um”. The word “Bus” also came in handy later because he had trouble differentiating “B” & “D”, so as one of the few words that he already knew how to spell, “Bus” helped him remember the “B” sound, and we adopted “Dog,” another word he could already spell,  to learn to read “D”.

This journey has gone on like this. Sometimes I have to explain words that he can only really imagine, such as picnic, cinema, and movie (these showed up in his subtraction classes when I found out he was behind on his mathematics too), but we have made great progress.

One moment stands out from the past few weeks. I was watching him struggle to read the word “Weekend.” That “n” just before a consonant always gives him trouble, but at last, he breathed the word out: w-ee-k-e-nd – weekend – and then he made the connection to the word he already knows in English – weekend – and his face simply lit up with delight and awe:

This was quite a proud moment for me too and really made me feel like all the long hours had been worth it.

Mukisa, in  Luganda, means “luck,” and maybe his luck has finally turned!

Dr. Connie Nshemereirwe is an independent science and policy facilitator and acts at the science-policy interface as a science writer, trainer, and speaker. A Civil Engineer turned Educator, her primary interests lie in creating solutions for the transformation of the education system in her home country of Uganda, especially targeting basic skills acquisition and equipping teachers to better adapt to changing times. She is also passionate about equipping scientists with the skills to communicate their science better with the public.