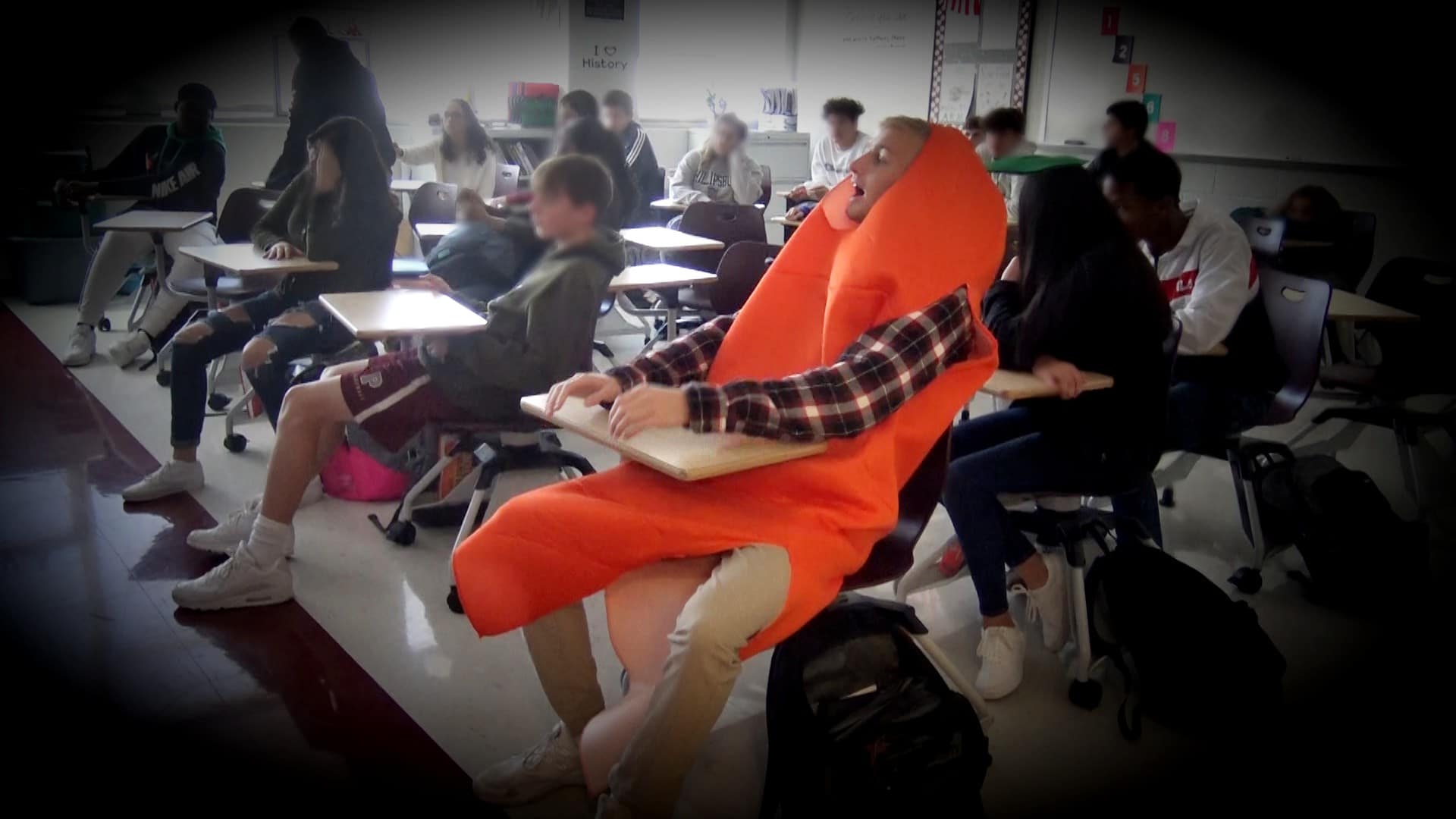 Mandatory Fun: How to Bring a Little Play Into the High School Classroom

I’m not sure where it says in the original teaching manual that you aren’t not supposed to have fun in school, especially high school. I suppose the original mission was to transform teenage students into adults who were serious and ready for the world. The fact is today’s high school students are more aware of the world than ever before, and they have more pressure placed on them than previous generations. Anxiety, lack of sleep, hours of homework, and club or sports obligations consume our most achieving students. Depression, apathy, and any host of outside factors from hunger, abuse, neglect, and addiction can plague our underachieving students. Creating opportunities for fun and play benefits both groups of students.

I work in a very diverse public high school in New Jersey. More than half of our students receive free or reduced lunch. Due to the economic challenges of our population and the overflow of our previous high school, (we had over 30 dilapidated trailers) the state of New Jersey built us a brand new school with a state of the art broadcast studio, which is part of my classroom.

I currently teach communications classes which include Journalism, Video Production, and Studio Broadcasting. The students create work that will be used and seen by the high school community, the parents, administration, and beyond. In that way, it is like a job. They don’t just get a grade, they get exposure, and there is some pressure to that. I like to balance out the pressure by building community amongst the students, creating a relaxed atmosphere in my classroom, planning what I call “mandatory fun,” and being flexible enough to let fun happen.

Group activities and projects are a great way to encourage collaboration, movement, and play. Moving around the room to meet with your group alone is a welcome reprieve from sitting at the computer, but the energy of group effort in a playful, creative project is downright fun. Here are some that I have tried:

When teaching my Journalism students the history of media, we pause to examine radio by creating a radio advertisement. With radio, they are forced to consider the importance of words and create a visual for the listener. Creating a visual image becomes more important since I ask them to create a radio advertisement for a fictional art show by Vincent Van Gogh to be held at our high school. Their job is to entice the listener to attend by setting a mood (with music), giving all the facts (time, cost, location), and describing a few paintings. I allow them to meet in the hallway outside my room or group up in different spots in the room. I encourage them to have fun with it. Inevitably, we always get different approaches: sophisticated, playful, informative, and pop culture. Some write their own rap songs, and some change the words to existing songs. They all step out of their comfort zone, and they have fun with it. The radio advertisement can easily be adapted to highlight an event for history or something from a book, or it can be done in a different language. How might you use this project in your class?

I’ve tried different approaches to the commercials, but what seems to have worked the best is to give them the specifics such as length (30 seconds) and a type of product: I often choose soap. The group has to decide what is unique about their soap and who their audience is. Some students get inventive, creating soaps that come out of the oven and double as a meal or car soaps that wash away twenty years of rust. In my class, the learning goal is to demonstrate their video-making skills, so it’s okay for them to get creative and silly with the content. This project might be adapted by focusing on something content-specific. For instance, what if the witches from Lady Macbeth did a commercial for whatever was in their cauldron, or how might you adapt World War II propaganda to sell something outrageous?

Acting and role-playing are excellent ways to bring playfulness into the classroom, but many feel significantly inhibited about performing or playing parts in front of others. Utilizing hats, costumes, wigs, and props can open up a door to playing in class.

The guidance department often asks my class to help them with commercials or posters for their services. For one commercial, the counselor showed me a commercial that another school had done where they filmed a student dressed up as a banana in different school settings. The point was that it’s easy to spot a banana in class, but it’s not always easy to spot mental illness. She wanted to do something like it, but different. We decided to make it a carrot and ordered a one size fits all carrot costume. I told her I didn’t want to just choose a student for the role, so we decided to have carrot auditions. Anyone who wanted to audition had to put on the costume and respond to questions or prompts like in an actual audition.

There is something about wearing a disguise that brings out people’s playfulness. We had so many different ways that students approached this role. Not everyone wanted to audition, but that was okay. They enjoyed watching the auditions and being part of the silliness, often calling out suggestions or encouraging those who auditioned.

Another time, I got permission from the drama teacher to take my students into the drama closet to film an intro for our news show. Students were allowed to go through the racks of costumes and pick something to wear, and grab props if they wanted to. Some got really crazy, some more modest, but all of them found something, and they were like little kids. Then they pretended to walk the runway to the song “I’m Too Sexy” by Right Said Fred. The combination of song and costume brought out all kinds of characters, and from students, you think would have nothing to do with it. The captain of the football team found a Mr. Incredible costume and proceeded to run up and down the hallway like a superhero in slow motion. Another student, a girl who could not sit and do anything on the computer but excelled in anything out of her chair, was quite the bold runway model in front of the camera. Another student found a Davy Crocket hat and prop gun and proceeded to “hunt wabbits.” Most of all they were laughing and having fun.

These dress-up experiences could be adapted in other classrooms by having students dress up as characters in a story you are reading or having them dress up as people from history for a roundtable discussion of a current topic. Or you could have a selection of hats, and students can respond to questions as someone who might wear this hat would. This might encourage empathy or seeing things from another perspective. I have considered starting my own rack of garments and trunk of props to have on hand in my classroom. People are constantly clearing stuff out of their closets that might have a second life in a classroom.

Some students might not want to participate in playful activities or in being silly. I don’t force them. Often they still enjoy the activity and watching others, but they are terrified of putting themselves out there. If possible, I will give them the job of recording or taking pictures. Or, if they are in a group activity, they can do the note-taking or the behind-the-scenes work. As long as they still feel like they have a say or they are somehow part of it.

For one intro video, we featured a student who loved Michael Jackson, could dance like Michael Jackson and was fearless. He dressed up like MJ in “Don’t Stop til You Get Enough” and performed all of MJ’s moves. We like to represent everyone who is part of the broadcast class in the intro, so we couldn’t just have the student playing Michael. We turned the whole filming experience into a dance party, and the other students came up and performed different moves to the same song. Three students did not want to dance, so we had them stand up on stage, cross their arms and shake their heads “no.” They were represented as not wanting to dance, and they were okay with that. We honored their choice in a way that still included them.

You can’t plan everything. Sometimes you just let things happen. Like I mentioned before, my classes, in some ways, are like a job. My broadcasting students have to film the announcements every day and create videos for different events and commercials. My journalism students write articles and record interviews that will be seen. I think it’s important for them to have the balance of some fun in the process. Sometimes it just happens, and I let them run with it (as long as our deadlines are met and the daily broadcast gets done.) If you walk into my classroom, it appears to be chaotic, and I know other teachers judge me for that. It’s not for everyone. What it is, to me, is energy… students being themselves and getting excited about different things. It is a break from the pressure of everything else they have going on.

Think back on your own school experience. I bet you remember the times where you were silly or creative. I bet you felt like you were getting away with something. Why not bring a little mischief into your class? Here are three reasons you should add some mandatory fun into your class:

So you see, in the end, we have not discarded the original goal of preparing students to be ready for the world; we’ve just made getting there a little more fun.

**If you have twenty minutes and would like to see some of the videos mentioned in this blog, please check out a video I made for the Creativity Expert Exchange Conference this past winter.

Beverly Zapatka Weihz is a renaissance woman. She is a high school communications teacher, an artist, an entrepreneur, an avid traveler, and a voracious student of life. She holds a B.A. in Art Therapy and teaching certificates for both Art and English. She received a Master’s of Science in Creative Studies and Change Leadership from SUNY Buffalo in 2016. Her master’s study work focused on research in motivation and finding the balance between technology and creativity. Her desire is to create a learning environment where all students can discover their strengths, their creativity and their own version of badass.

Collaborate for Creativity: Tips to Encourage Kids to Work Together