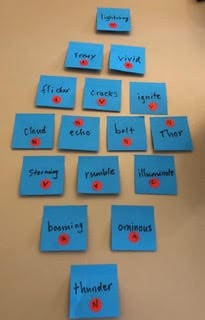 When Lightening Strikes: Brainstorming with Pa

When COVID 19 hit this Spring, my wife and I agreed to homeschool our ten and seven-year-old grandsons for two weeks. Those two weeks turned into nine, and they were weeks of pure joy for everyone involved.

My wife, Judy, was an elementary teacher and reading specialist for over 40 years.  In my first career, I was an elementary Montessori teacher for eight years.  We both attended the Creative Problem Solving Institute for nearly 40 years, where we were introduced to a world of creative thinking—both research into the topic and its practice.  I left teaching to pursue a career as a specialist in creativity and innovation, teaching and applying the Creative Problem Solving (CPS) process in companies around the world for 35 years.  Now, bringing my learning from all these years and sharing it with my grandchildren has been perhaps my greatest work.  Judy and I felt well prepared to embark on this homeschooling journey.

My role was to be Nick’s learning coach.  Nick is ten and loves to learn!  Every day I would set a brainstorming exercise for us to undertake together. It was a great workout for his brain, and he loved these sessions. Sometimes we’d brainstorm ideas for dinner, or ideas for his history project, or ideas for an unmet need in the world, or ways to make the world a better place.  He would ask, “When are we going to brainstorm, Pa?”  I would integrate brainstorming whenever possible.  We used sticky notes for diverging and sticky dots for converging.

We devoted time every day to creative thinking.  We talked about divergent and convergent thinking, and how important it is to do them separately.  This made a lot of sense to Nick, and he commented that it made things go faster.  He recognized that it’s an efficient way to think, and he also said that it makes learning more fun.  Together, we came up with the wackiest ideas, and it was a thrill to observe his mind as it was inventing so freely. We talked about how you can turn a wacky idea into something useful.  He had fun making connections between unrelated images or objects to help us come up with more ideas.  And we had fun selecting the ideas.  In every case, we followed up our brainstorming by making some choices.  The balance between divergent and convergent thinking is often referred to as the heartbeat of the creative process.  Nick found the rhythm!

One of Nick’s assignments each week was to write a different kind of poem.  One week it was haiku, another week a cinquain, and then a diamante poem.  What an excellent opportunity to do some brainstorming!

A diamante is an unrhymed seven-line poem. The beginning and ending lines are the shortest, while middle lines are longer, giving diamante poems a diamond shape. “Diamante” is the Italian word for diamond, so this poetic form is named for the diamond shape formed by the text itself on the page. It also requires certain parts of speech on each line. This is the format for a diamante poem:

Nick and I pulled out the sticky notes and dots.  First I asked him to think about something he would like to write his diamante poem about.  He quickly said, “lightning!”  Nick wrote the word, a noun, on a sticky note, and it became the first line of his poem.

I suggested to Nick that he brainstorm a whole bunch of nouns related to lightning. Once we had a collection of related nouns, we did the same with verbs, then adjectives.  He checked his thesaurus to find words when he got stuck.  In a very short time, Nick had generated over 30 sticky notes for each of the parts of speech he needed for his poem.

The next step was selecting words for the final poem.  We put an “N” on five yellow dots, since we’d need five more nouns for the poem, an “A” on four blue dots for the adjectives, and a “V” on six red dots for verbs. Nick decisively chose the words he wanted to use, putting dots on the sticky notes. This step went very quickly.

Now that Nick had all of the ingredients, he began to arrange the sticky notes into the prescribed diamante form.  He went through several iterations, moving the sticky notes around to try out different orders for the words, and at one point, he said, “that’s it!”  He was delighted and proud of his poem.  He told me that it was so much fun that he wanted to write another one.  And we did! It was a great addition to our daily brainstorming!

Nick’s younger brother saw how much fun we were having with our brainstorming sessions that he asked if he could join us.  More ideas!  More fun!

Douglas Reid is the Founder of Douglas Reid—Thinking Partners, an organizational development group that specializes in leadership, collaboration, innovation, and change leadership.   Above all else, Doug helps individuals and groups to think differently about their particular situation—to gain a new perspective and understanding.  As an Executive Coach and Master Facilitator, Doug applies his talents and experience to individual and group development and transformation.  Doug is a seasoned specialist in the field of organizational creativity, innovation, strategic thinking and leadership and has worked throughout North America, Europe, and Asia in many different industries.