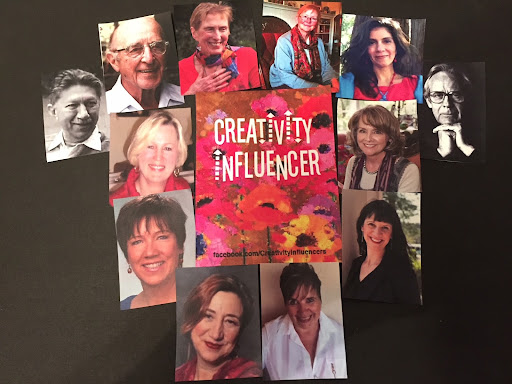 Who are your creativity influencers?

Who are the creativity influencers inspiring new ways of understanding, defining, and engaging in creativity at this point in the 21st century?

The course I developed was called: “Creative Process: Awakening Creative Potential for Personal and Professional Growth.” The number of students walking into the first class session self-identifying as ‘not creative’ was alarming to me. I set up my classroom as an ‘evaluation free’ zone so students could feel safe expressing their creativity. Early in my heuristic doctoral research process I had an ‘illumination’ that revealed the term ‘creativity influencers’ (2014).

The image below shows my personal creativity influencers! -Marta Davidovich

We then asked our contributors the following: Who are the creativity influencers inspiring new ways of understanding, defining, and engaging in creativity at this point in the 21st century? Here is what they shared:

Marta Davidovich Ockuly is a humanistic psychologist, creativity educator, researcher, and influencer with a passion (and process) for awakening, inspiring, and encouraging individual and educator creative confidence with J.O.Y. (just one yes). She is also the founder and C.E.O. of the Creative Potential Institute – a future-focused think tank researching the lived experience of human creativity as well as increasing creative confidence and self-identification with creativity across the lifespan. She also contributes to curriculum development nationally and globally. Direct inquiries to: Marta D. Ockuly via https://www.linkedin.com/in/martadavidovichockuly/